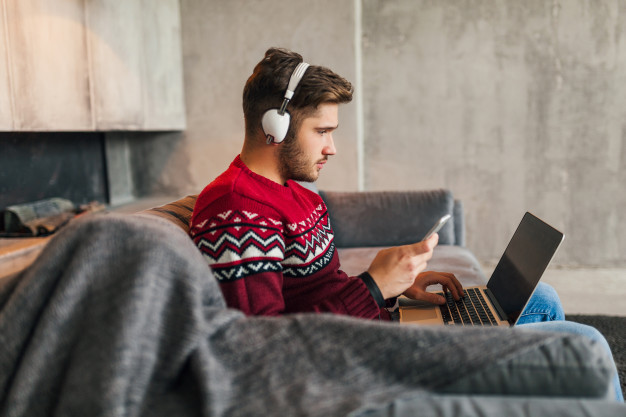 It might work for some, it might not work for others – just like other subjective methods like work ethics, cooking, and video editing. In short, productivity depends upon you whether or not listening with headphones works.

Personally, I get to focus on finishing articles like these faster as well as thoroughly research each topic well. It’s really up to you.

How Music Helps You Focus

If you’re easily distracted by outside sounds as well as the things you see, putting on headphones can help you forget about everything else.

Whether you’re trying to block the sounds of your parents arguing with each other or you’re at the park wanting nothing but just yourself and the playlist you have on Spotify, yes, using headphones helps a lot.

First, it puts you in isolation mode where it’s just you, the music, and the task that you’re doing. Second, it cancels all the background noises. And third, it’s all about you – the personal music taste you have, the project you’re working on and looking at right now, and seclusion from the outside world.

Whichever music you listen to depends on what keeps you in check. Sometimes classical music like Beethoven and Chopin, old-school rock like AC/DC and Queen, metal including Slipknot and pop including Billie Eilish and Ariana Grande.

These days, live streaming services and infinite playlists most often play lo-fi hip-hop music. Think of it as a very relaxing yet lowkey surreal type of hip-hop minus the heavy beats and loud voices.

But others, well, there are other kinds of “music” they listen to.

Beyond Listening to Music

If you’re not much of an audiophile or at least an audio enthusiast, you would think everyone who listens with headphones solely listens to their favorite bands. However, such is not the case. Here are some other types of audio users listen to

Much like the radio, a podcast is all about talking – both casual and formal conversations between the host and the guest. But unlike the radio, podcasts do not have commercial breaks. And for some headphone users, this is the preferred audio to keep them focused on their jobs.

If you can’t go outside or just want to replicate almost the same experience of the outdoors, there are numerous audio files that include the sounds of nature.

These include water streaming down the river, the natural sounds of the forest at night, the howling winds in an afternoon dessert, or a quiet moment at the beach.

While some tend to improve their work ethics with nature sounds, others prefer a more societal approach such as the usual sound of a mall in the afternoon, or the children playing at the park. Don’t believe me? You should check YouTube or Spotify. There is a handful of those.

At the end of the day, listening to music with headphones does help. While it doesn’t work for everyone, those who do tend to use headphones to listen more to than just music as long as it helps them work better and more consistently.