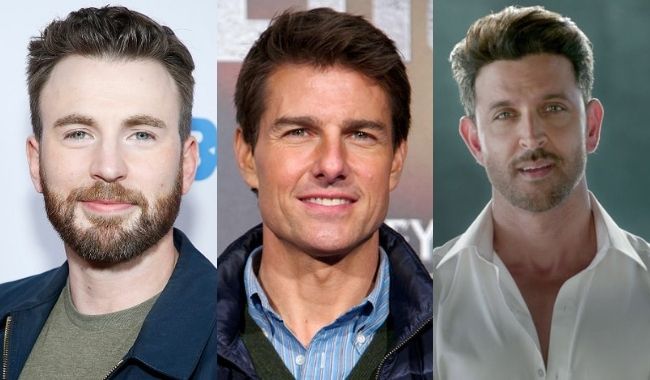 The most handsome men in this list are very attractive and handsome by appearance and are well-known & loved by a large number of people. A few of them have been named the most attractive males by popular magazines.

Today, around the world there are around 4 billion males living in the world population. There are thousands to billions of handsome men without any doubt but most importantly the inner appearance is more attractive than the outer appearance.

Most Handsome Men In The World

Number one on our list is Chris Evans who has become one of the most highly-paid actors around the globe being in the Marvel series. His bubbly and friendly appearance, blue eyes, and handsome appearance made him top the list for being the most handsome man in the world.

Tom Cruise is known for his impressive acting talents and charming appearance however besides being a great actor, he is an excellent producer too. He was a part of numerous masterpieces such as Edge of Tomorrow, Mission Impossible series, Knight and Day, and many more. Tom Cruise has received three Golden Globes, a Critics Choice Movie Award as well as three nominations to the Academy Awards.

To talk about the look of Hrithik Roshan, he has the perfect figure, great looks, and a stunning personality.  He is often referred to as a Greek god because of his stunning appearance. Without any doubt, he’s an outstanding actor and dancer of the Bollywood Industry and he received numerous awards for that he has earned 6 Filmfare awards and others.

Fourth on our list is American actor Brad Pitt who has won the hearts of people with his amazing acting skills in Troy, Fight Club, Moneyball, Mr. & Mrs. Smith, and others. In recognition of his exceptional performance as an actor and director throughout his career, he has been awarded numerous awards too.

DiCaprio is a famous face throughout the globe & he earned a variety of awards throughout his acting career, which include the Academy Award, a British Academy Film Award, the Screen Actors Guild Award, three Golden Globe Awards, and a lot more.

Sixth on our list is the handsome Iraqi model Omar Borkan Al Gala, who was once asked to quit Saudi Arabia for being this handsome. He was the most loved by women in the Middle East by females, even he topped the list being most attractive males of 2022.

The American actor, model, and activist is well known for his character as the vampire in the supernatural drama named, “The Vampire Diaries”. He has acted in numerous Netflix series and He ranks seventh on the list for being one of the most handsome men in the world.

The Australian actor started his acting career in Hollywood by working on the popular science fiction series Star Trek, however, he is most well-known for his performance as Thor in Marvel the superhero series Avengers.

He also had a major part in the horror film Cabin In The Woods & Extraction. Chris was awarded the People’s Choice Awards for the Favourite Action Movie Actor in 2016

Kim Tae Hyung is mostly known by the stage name V. He began his career in music at the age of 13 and has made a mark in the world of music with his solo tracks like Sweet Night, Winter beers, 4 o’clock, and scenery, etc. He has gained worldwide fame for his stunning performance and appearance.

Not only is Justin Trudeau handsome; he is also very lovely and sweet. We love him not just for his appearance but in addition for the kindness and love for humanity that he displays. Trudeau is without a doubt the most handsome person currently. That’s why Trudeau ranks the third spot

In Toronto, Canada in 1983 the actor and model has won hearts with his style and stunning physique, thus being included on this list of the most handsome men around the globe. He has been featured in numerous ads for Tommy Hilfiger, Gap Inc. as well as Michael Kors.

Every football fan is familiar with the name of David Beckham, as he is a professional footballer. However, the reason behind his good fanbase is not only for his football career but also for his attractive looks.

In his entire football career of 20-years, he won 19 major and significant awards. His muscular body and charming smile make every woman fall for him.

Thomas William Hiddleston is an English actor who earned international fame for his role as Loki In The Avengers. He also played an important role in the film Kong: Skull Island.

The year 2009 was the time that Vanity Fair ranked Robert Pattinson for being the most handsome man around the globe. He gained fame for his performance on the television show “Harry Potter and The Goblet of Fire” in 2005.

Henry Cavill is another face on the list of the most handsome man in the world. From being a Superman to being a Witcher, Cavill has played all roles flawlessly.

The British actor was also part of memorable films such as Man of Steel, Batman Vs. Superman and Justice League. Since the characters from the comic books are performed by some of today’s top actors, the battle to make a mark was not easy.

Shahrukh Khan, the famous Bollywood actor, is a handsome man with a smart mind. He is often referred to by the name of “King Khan” of Indian Cinema. The first film starring Shahrukh Khan was Deewana in 1992, in which He was the main actor.

The 54 years old actor has many hit movies as well as fifteen Filmfare Awards, 5 Producers Guild Film Awards, 17 Screen Awards, 6 IIFA Awards, and many international awards to his name.

Eighteenth on our list is Prince William, who is a charming man with his refined appearance and handsome smile. He is regarded as the most handsome person in Europe. With a perfect height and elegant style, he has an eminent prince-like personality.

The British actor’s full name is Idrissa Akuna Elba. Apart from his acting career, he was a teen DJ for weddings. Most likely due to his passion for music, he’s been the subject of numerous music videos.

Because of his work as an actor who is hard-working and musician, he was honored by Queen Elizabeth II, who was named the Officer of the Order of the British Empire (OBE) in the year 2016.

Richard Tiffany Gere is an American actor and producer who made a name for himself as an actor after his part in American Gigolo, which established him as a leading character as well as a sexual symbol!

Despite the fact Gere is now 67, he was considered to be one of the top lead actors of his time. While he’s not interested in movies anymore, Gere is plenty rich enough to avoid Hollywood! He still earns 23rd place among our lists of most attractive men on the planet.