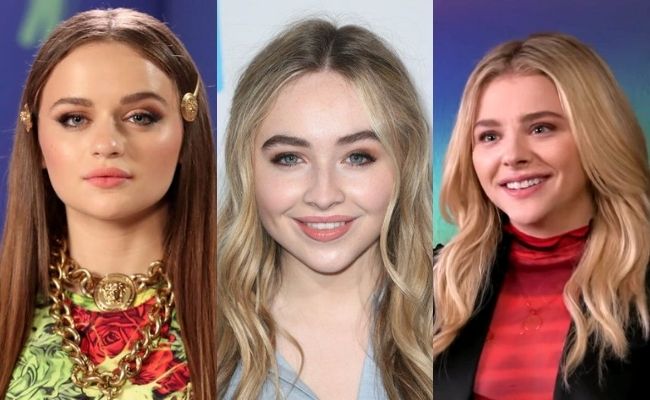 Having your own identity and being known in the world as a celebrity is a wonderful achievement that young talents wish to have. While some of you only dream of becoming a celebrity and making a worldwide impression some others even achieve it.

Here are some beautiful and amazing celebrities who are under 25 and still ruling the world with their charm and glamour. They have done exceptional work in their field and have influenced the world to make it a better place.

They have worked hard and achieved their dream and are now known as the most successful celebrities in the world. Below are the Top 20 female celebrities under 25.

The beautiful kissing booth actress is the first one in the list of Top 20 celebrities under 25. The actress has played some credible roles in movies and shows like The Kissing Booth, Crazy, Stupid, Love, Ramona and Beezus, The Act and many others.

We have seen her act exceptionally in The Act series, for which she was nominated for a Golden Globe Award and Primetime Emmy Award.

Millie Bobby Brown is a British actress and has worked in the famous Netflix sci-fi series “Stranger Things”. She is the youngest actress to have been nominated multiple times in Emmy. Millie Bobby Brown was on Time 100 list of most influential people, in 2018. She also became UNICEF Goodwill Ambassador in the same year.

Chloe Grace Moretz started her acting career at a very young age and grew up to become one of the celebrities under 25. She has acted in many shows and movies like 500 Days of shimmer, Diary of a Wimpy Kid, Sexy Money, Dirty and so on. Chloe has acted in many horror, Action-drama and comedy movies.

The most popular actress Anya made her way in cinema through her great roles like Emma Woodhouse and Emma and Beth Harmon in series like Jane Austen and the Queen’s Gambit. She is a Primetime Emmy winner, Golden Globe Award Winner and BAFTA Award Winner.

Sabrina is an American actress, voice actress and singer. She made her debut in the cinemas with the crime thriller Law and Order. The series called “The Goodwin Games” gave her recognition worldwide.

Sabrina has won two Radio Disney Music Awards one for “Can’t Blame a Girl for Trying” and the other for “Eyes Wide Open”. She has been in a lot of Disney shows and has even voiced Melissa Chase in Milo Murphy’s Law.

Maya Hawke is a well-known actress in Hollywood. She has worked in many shows like Little Women and Stranger Things. Maya Hawke has won a Saturn Award and was nominated for Screen Actors Guild Award for her role in Stranger Things.

Ariel Winter is a young actress and famous voice-over artist. She is popular for her roles like Alex Dunphy. She has done voice-over for Disney Juniors Sofia the First, Disney’s Bambi II, Gretchen in Phineas and Ferb and many other animated shows.

Elle Fanning started her acting career at the young age of 3. She also served as a jury member, being the youngest one at the Cannes Film Festival. She has worked in well-known comedy shows like Princess aurora, A Zoo, Ginger and Rosa, The Great, How to Talk to Girls at parties and many more. She is one of the most successful blond actresses in their 20’s.

McKenna Grace is a child actress from America. She has acted as a child prodigy in Gifted, Young Sheldon etc. She has also acted in the Netflix series Chilling Adventure of Sabrina. Mckenna Grace was nominated in critics choice movie Award for Best Young Performer because of her role in Gifted.

Emma Mackey has a very big fan base for her beautiful personality. She has worked in Netflix series like Sex Education and has also been featured in other films and shows like The Water Lake, Summit Fever, Eiff and others. She was nominated as the best female comedy performer for the BAFTA.

Olivia Holt is a pretty actress well known for her numerous Disney movies. She had started her career in music. Olivia Holt has been doing theatres since she was 10 and because of her interest in singing, she is shining brighter than ever. She was also a cast in Disney XD’s Kickin’ it.

Marsai Martin is the youngest actress-producer to become famous at an early age. She is well-known for her character as Diane Johnson in Black-ish and her self-produced film “Little”. She has been awarded many awards including BET Awards, Shorty Awards and many others.

Zendaya is a celebrity known for her amazing characters in Spiderman and Homecoming. She is also recognised for her role in series like Euphoria. Zendaya has won many awards like Satellite Award, Primetime Emmy, Saturn Award and so on.

Florence Pugh made her entry into the cinematic world through the horror drama called “The Falling”. But she got recognition for her role as Yelena Belova, the secret spy from Black Widow. She has also won many awards for her incredible performance.

Hailee Steinfeld is an actress, singer and model. She has gained a lot of attention for her work in Pitch Perfect 2. She was also nominated for a Golden Globe for her performance in The Edge of Seventeen. She is one of the most famous actresses in the world.

Dove Cameron is an American actress and singer. She has played many roles in Disney movies since her childhood. Her cover of “On Top of the World” charted at 17 on Billboard Kid Digital songs. Even being an American she speaks French the most and is of Slovak, Russian and Hungarian ancestry.

Kathryn Newton is a popular young actress well known for her CBS comedy series, Garry Unmarried. Ant-man and Wasp are her latest projects that made her get a huge inclination in her career. She played a very good role in Netflix’s The Society. She also received a young artist award in her 20’s.

Bella Thorne is a model, singer and actress. She is famous for her roles in movies like Bella, Famous in Love and Infamous. She has been awarded many awards like the Teen Choice Award, Young Artist Award, Imagen Award and so on.

Lili Reinhart is one of the best actress female celebrities under 25. She has won 7 Teen choice awards for her role as Batty Cooper in Riverdale. She has done many roles especially portraying Grace Town in Chemical Hearts. Lili Reinhart also served as one of the film’s producers.