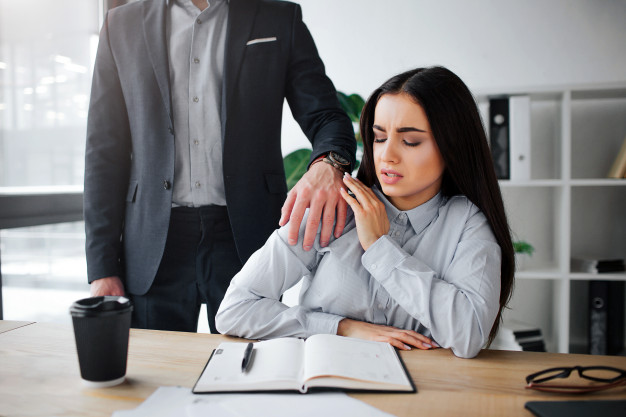 When a woman lands her dream job, she often has visions of earning her colleagues’ respect, winning her boss’s praise, and breaking through any glass ceilings. But sometimes what she gets is more shocking and demeaning.

It’s quite common for women at a conference table at work to hear bawdy and vulgar jokes from male co-workers who end their quips with punch lines that objectify women.

Some women are also the target of invasive touching, which can include a pat on the breasts or the buttocks. Still, others must constantly fend off whistling, aggressive requests for dates, or loud assessments of their bodies’ sexual potential.

Can Men be Victims, too?

While women face 80 percent of sexual harassment on the job, men can also be victims. According to the Washington Post, 20 percent of harassment claims come from male workers. They might be propositioned or subjected to harassment or physical gestures and assaults.

What Can You Do?

Whether the victim is male or female, these actions can be intimidating, even more so if they come from a boss or supervisor who wants to ruin the worker’s reputation and job prospects.

Most companies have their own policies and protocols in place to prevent harassment. Some forbid fraternization or intraoffice dating. However, offenses still happen. Be cognizant of your company’s policy. Read all the rules upon hiring.

The first thing an employee should do when facing sexual harassment is document everything. Keep detailed notes. Next, write a complaint and submit it to the human resource department.

Also, consider filing a police report; if the offense results in an injury or threat of harm, definitely go straight to the police. However, still, tell your employer because you don’t want them to claim that they knew nothing about the incident.

In many cases, the human resources department will suspend, fire, or relocate the offending party to another department, depending on the severity of the offense and whether there is a pattern of behavior.

Is it or Isn’t it Harassment?

Some situations fall into a gray area and would not be considered sexual harassment in some states/countries. For example, in California, if an employee is thought to welcome, invite or participate in flirtations, sexual intercourse, or other behavior, the incident cannot be deemed as harassment.

In other states, however, the difference in power between supervisor and underling may make such situations a matter of coercion and harassment.

Another gray area includes harassment from someone who isn’t an employee at your company. If a customer, independent contractor, or vendor harasses you, that can still be considered workplace harassment.

All employees, including supervisors, must undergo interactive lessons either in person or in an online classroom or webinar taught by lawyers, professors, or HR leaders. This will, hopefully, make future workspaces better for everyone and reduce incidents of impropriety.

By knowing your rights, asserting them, and holding everyone to professional standards of conduct, workers can achieve career goals without sacrificing dignity and peace of mind to harassers.