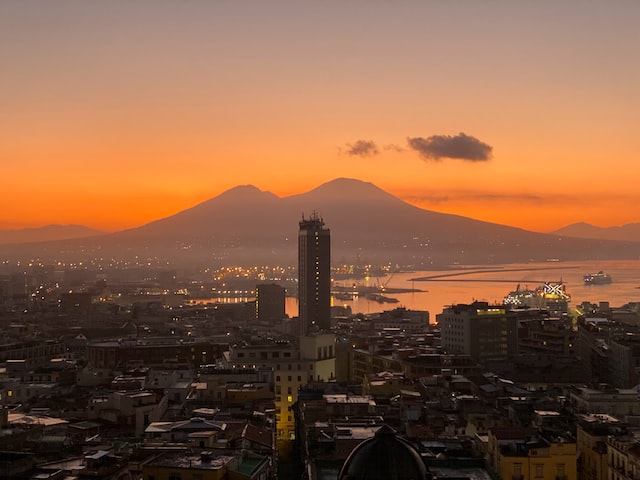 Naples stands as one of Italy’s most iconic cities, notably for being the place where pizza was created but also for its incredible history that spans nearly 3,000 years.

Beginning as a Greek city in around the 8th century BC, Naples has since been under the rule of the Roman Empire, taken over by the Barbarians, and later on conceded to Spain and Austria as well.

Each of these events has had a big impact on the history of the town, transforming it in different ways until it became the recognizable city that it is today.

As the third largest city in all of Italy, Naples holds many secrets and wonders for you to discover. It is home to a UNESCO World Heritage Site, some stunning old fortresses, great restaurants, and ancient catacombs, plus so many more places to explore.

If you are hoping to vacation in Naples one day then you will definitely want to check out these places written below! As you are adventuring around the city, leave your things at a Naples luggage storage locker. See the marvelous sights without the burden of bags.

The beautiful Teatro di San Carlo was built in 1737 as a request from King Charles of Bourbon and you will find it attached to the Royal Palace in Piazza Plebiscito.

The memorable red and gold interior of the theater is designed in a horseshoe shape, with boxes and seats situated around the perimeter and separated into six tiers. If you look to the rear of the building you will see an incredible seating area that was used as the royal box.

There are still performances happening regularly at the theater and you should either buy a ticket for a show or get a guided tour of the building. It is an unforgettable place to watch live entertainment, and you will be able to say that you’ve been inside Europe’s oldest active opera house!

Cappella Sansevero, also known as San Severo Chapel, is found close to Naples Archaeological Museum and is definitely a landmark that you don’t want to miss out on visiting.

The original building dated back to 1590, although it went through a remodeling process in the 18th century by the dynasty’s seventh prince named Raimondo di Sangro.

Before this, it served as private property for the Duke of Torremaggiore and later on as a burial site. The exterior of the building may be unassuming, but once you step inside you will be amazed to see artworks from some of the best artists in Italy.

This includes stunning frescoes covering the whole ceiling as well as statues made of marble, including the Veiled Christ sculpted by Guiseppe Sanmartino.

The Monastery of Santa Chiara was built in 1340 under the orders of the king of the time, Robert of Anjou, and his wife Sancha of Mallorca.

The beautiful Baroque and Neo-Gothic style of the monastery has lasted throughout the years and it is also the final resting place for several former rulers of Italy, as well as royal family members, including St. Clare of Assisi.

On site, you will find intricately decorated lacework and a simple but beautiful facade. Inside there are scenes from the Old Testament displayed in the frescoes as well as ancient artifacts dating back to the time of the Romans. The monastery also houses a museum where you can learn more about this gorgeous building.

The graves in the San Gennaro Catacombs were used as tombs for a noble family back in the 2nd century AD, although they were eventually used as burial sites for the Christian community as well.

In the 4th century Saint Agrippinus, who was Naples’ first patron, as well as San Gennaro was buried here as well, and the catacombs were named after him.

You can easily walk through the spacious upper tunnels of the catacombs to see the crypts yourself as well as the frescoes lining the walls which portray depictions of different saints. The lower levels hold over 3,000 tombs and are an incredible place to visit.

The Naples Cathedral was also dedicated to the patron saint San Gennaro, so after visiting his resting place in the catacombs you can head here to admire the beautiful architecture of the city’s most famous church!

The building was constructed sometime in the 13th century and was later on renovated to add over 100 columns taken from ancient Greek temples.

Make sure that you step inside the cathedral because it is stunning! Three times every year, the church hosts a ceremony where crowds gather inside the building and attentively watch the vessels containing relics of the saint’s blood. Apparently, if they liquify then it is a good sign for life in Naples!

If you want to do some retail therapy then the stunning Galleria Umberto I is the place that you will want to be. This shopping mall doesn’t only hold some fantastic fashion boutiques, cute cafes, and great restaurants, but it is also aesthetically beautiful!

The building was constructed out of a network of covered city streets back in the 19th century when King Umberto I was the ruler. The gallery was named after him and it is still the main shopping mall of the city today.

The glass ceilings let in lots of natural light and the mosaic tiled floors are gorgeous as well. Take some time to appreciate this beautiful building while you are in Naples!

Seeing the Best of Naples

From gorgeous old churches to ancient catacombs, Naples sure is a beautiful city. It holds so many secrets hidden throughout its streets, or even underneath them, which is why you should do your research before visiting to make sure that you don’t miss out on any of its wonders!

Now that you know about the best places to go sightseeing in Naples you are ready to start planning your next vacation to Italy.