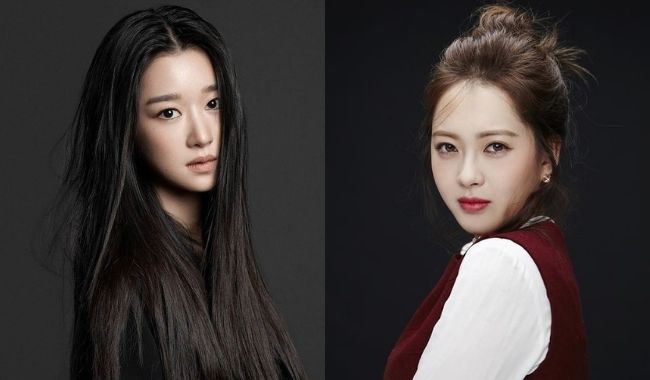 Korean women are famous all around the world for their beauty and grace. Those beautiful eyes and the smooth, alabaster skin, and of course, the gentle arch of their eyebrows–they have definitely hit the genetic lottery when it comes to their looks.

In fact, we are sure you have a crush on some of the amazing-looking Korean actresses who regularly star on everyone’s favourite K-dramas! To find out the audience’s opinion on the famous Korean actresses, a polling website called KingChoice decided to run a survey.

Their survey was aimed at finding out the most beautiful Korean actresses, according to the people’s choice. Sounds interesting, right? If you want to learn about the results of that poll, jump right in to find out!

Here are the names of all the ethereal Korean beauties who ranked in the list of top 25 most beautiful Korean actresses.

At number 25 on our list, we have 32-year-old South Korean actress Jung So-min. The Seoul native made her small screen debut with the 2010 television series ‘Bad Guy’.

She is famous for her role as the lead in the 2010 TV series ‘Playful Kiss’, which was adapted from the popular manga Itazura Na Kiss.

While Lee Sung Kyung has a flourishing modelling career, her on-screen presence as an actress has wowed many fans. This doll-faced entertainer has played the lead in popular series like Weightlifting Fairy Kim Bok-Joo and Dr. Romantic 2 where she co-starred with Nam Joo-hyuk and Han Suk-kyu respectively.

Thirty-year-old Bo-ah comes from Daejeon, South Korea. A successful actress, model, and host, she has garnered quite a fanbase for herself thanks to her exceptional acting in Temperature of Love, Goodbye to Goodbye, My Strange Hero, Forest, and Tale of the Nine-Tailed.

Jung Eun-Chae comes at number 22 on our list of most beautiful actresses all around the world. The 35-year-old Busan native stepped into the world of glitz and glamour as a budding model. Then, she switched careers to try out acting. She excelled in her role as Haewon in Nobody’s Daughter Haewon, a film by the famous director Hong Sang-soo. The film received generally positive reviews and premiered at the 63rd Berlin International Film Festival.

Kim Hee Sun is a veteran South Korean actress who rose to fame in her breakthrough role in Men of the Bath House. Ever since then, she continued starring in the lead roles of several 1990s television series like Propose, Wedding Dress, Forever Yours, Mister Q, Sunflower, and Tomato.

Kim Hee Sun can speak Mandarin as she had to learn the language when she was cast opposite Jackie Chan in the movie The Myth.

Kim Da-mi is a 27-year-old actress who is a Performing Arts graduate from the prestigious Incheon National University. She has starred in the lead role in the popular TV series Itaewon Class.

Besides this, she is also known for her phenomenal acting in the hit action-mystery film The Witch: Part 1. The Subversion.

Moon Chae-won is a 35-year-old South Korean actress hailing from Daegu province. She rose to fame in 2008 when she took up the role of a gisaeng in the 2008 production called Painter of the Moon.

The talent garnered a lot of attention and she was spotted by director Jin Hyuk. In the following year, he cast him in the superhit  K-drama Brilliant Legacy, one of the highest-rated Korean dramas of 2009.

Jun Ji-Hyun, whose English name is Gianna Jun, is a talented South Korean actress and model. The 40-year-old has made herself a name in the entertainment industry for her acting skills.

She has received many prestigious awards like the Daesang for Television at the Baeksang Art Awards and two Grand Bell Awards for Best Actress. Ji-Hyun has also starred in the Netflix drama Kingdom.

Song Hye-Kyo has had a huge impact in South Korea as well as in the international entertainment industry. She has starred in internationally popular roles like the lead in the television dramas Autumn in My Heart, All In, Full House, That Winter, the Wind Blows, Descendants of the Sun, Encounter, Now and We Are Breaking Up.

She debuted in the mid-1990s and has been at the forefront of the Hallyu wave. She started as a model but switched to acting with consecutive successful projects.

29-year-old Kim Ji-won is a South Korean actress from Seoul. At such a young age, Ji-won has already established herself as a popular Hallyu star in all of Korea.

She has gained widespread attention thanks to her roles in several successful television series such as The Heirs, Descendants of the Sun, Fight for My Way, and Arthdal Chronicles.

Park Min-young is a popular South Korean actress with an interesting childhood story. She was an exchange student in high school and had stayed abroad for some time. During her time as an overseas student, she picked up English-speaking skills.

The 35-year-old actress’s claim to fame is the historical coming-of-age drama Sungkyunkwan Scandal. She has also starred in popular TV series like City Hunter, Glory Jane, and Dr. Jin.

South Korean heartthrob Nam Ji-Hyun stepped into the entertainment industry as a child actress in various wildly successful Korean dramas. Then, she transitioned into an acclaimed actress who has played the lead role in productions like Queen Seondeok, Suspicious Partner, 100 Days My Prince, and 365: Repeat the Year.

Even though her birth name is Lee Ji-Eun, IU prefers her stage name as it is a combination of ‘I’ and ‘you’ meaning “you and I become one through music.” She is an acclaimed South Korean singer-songwriter and actress.

In 2007, she was signed by the popular South Korean record label Kakao M as a trainee. She released her first solo mini-album when she was only 15. Her career has flourished since then and now, she has got a huge fanbase.

Han Hyo-Joo is simply multi-talented! The leading South Korean entertainer has acted in movies, modelled for various designers, and released several songs too. Her breakthrough performance in the television drama series: Spring Waltz in 2006 was an instant hit at that time.

She has also starred in the film Cold Eyes, for which she won Best Actress at the 2013 Blue Dragon Film Awards. She was also cast in Masquerade–one of the highest-grossing Korean films of all time.

South Korean actress Kim Yoo-Jung was born on September 22, 1999. At only 22 years of age, she has made quite a name for herself in the Korean entertainment industry. She started as a child actress in 2003 when she was only 5.

In the subsequent years, she became known as one of the most successful child actresses of the time. She has also gained public attention for her acting in the television series Moon Embracing the Sun (2012) May Queen (2012), Golden Rainbow (2013), Secret Door (2014), and Angry Mom (2015). Not just TV series, she has also starred in films like Commitment (2013), and Circle of Atonement (2015).

Bae Su-ji, also known by her stage name Bae Suzy, is a South Korean singer, actress, and model. As a part of the girl group Miss A, she had a flourishing music career before shifting her focus to acting.

Her debut television series Dream High (2011) gained country-wide popularity and landed her lead roles in series such as Gu Family Book (2013), Uncontrollably Fond (2016), While You Were Sleeping (2017), etc. As her debut was so successful, she is called “The Nation’s First Love” in her home country.

She gained widespread popularity for her versatile acting skills as she delved into different genres with movies like Alone in Love (2006), My Wife Got Married (2008), Personal Taste (2010), and The Pirates (2014).

She has made it to the Forbes Korea Power Celebrity 40 for three consecutive years 2019-21.

Kim So-Hyun is a South Korean actress who started as a child artist in the early 2000s. She has played some critically acclaimed roles in Moon Embracing the Sun (2012) and Missing You (2013).

Park Shin-Hye was an instant success thanks to her roles in the television drama Stairway to Heaven as well as the film Miracle in Cell No. 7. The latter is one of the highest-grossing Korean movies of all time.

She is praised by all in the entertainment industry and has done many popular projects like You’re Beautiful, The Heirs, Pinocchio, Doctors, Memories of the Alhambra, etc. Her most recent appearance was in Sisyphus: The Myth in 2021.

Kim Go-Eun was born July 2, 1991, in South Korea. She debuted in a wildly famous role in the 2012 film A Muse. She was awarded several Best New Actress awards for her performance in the film. Her most recent project was released in 2021 called Yumi’s Cells.

Jeon So-min has not only made a name for herself as an actress and a model, but she is also a published author. In 2004, Jeon landed her debut role in the rom-com Miracle. Her first big-screen act was in the 2006 movie called Cinderella. Jeon also played the lead in the famous TV series Princess Aurora, for which she was awarded the “Best New Actress Award” at the MBC Awards.

Kim Hyun-Joo is a South Korean actress who is best known for playing the protagonist in television dramas Glass Slippers (2002), Toji, the Land (2004), Twinkle Twinkle (2011), etc. Her distinctive features and beautiful voice have placed her fourth on our list of most beautiful Korean actresses.

Coming down to the top 3 choices for the most beautiful Korean actresses, we must name Song Ji-Hyo as our third pick. Although she prefers her stage name, her birth name is Cheon Soo-Yeon.

She has also modeled for various designers besides starring in top Korean movies and series. She got international recognition as a series regular in the show Running Man since 2010.

Go Ara is undoubtedly one of the most beautiful South Korean actresses and models. She has starred in many famous TV series such as Ms. Hammurabi, Haechi, and Do Do Sol Sol La La Sol.

Our top pick for this list is Seo Ye-Ji. She began as a minor actress in the sitcom Potato Star 2013QR3. Then she landed some big roles in productions like the period drama Diary of a Night Watchman (2014), the thriller Last (2015), and the fantasy Moorim School: Saga of the Brave (2016). Her 2020 release–It’s Okay Not to Be Okay–was aired on Netflix.

Did you enjoy reading about the top 25 most beautiful actresses in Korea? Did you guess all their ranks correctly?

Well, if you found this article interesting and informative, do spread the good word! Share our list among your friends and check out other interesting articles on our website. Thank you for reading this and have a great day!

How AI Can Help You Sleep Better?

How to Make Money from Home with your Hobbies

Are Home Theaters worth it?

Best CBD Vape Juices Out There?

Think About Gifting Yourself A Better You