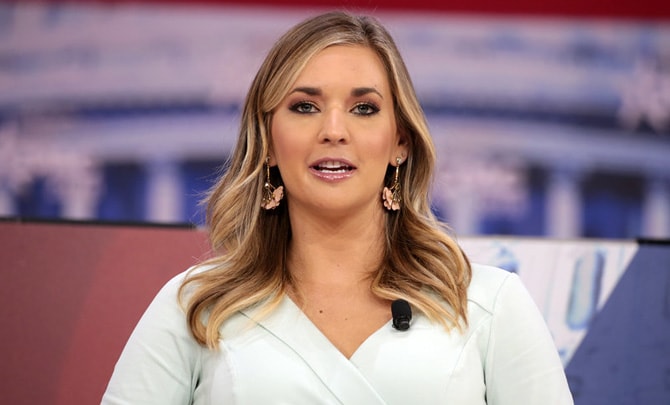 Fox News is a global corporation and one of the foremost news outlets in the USA. But, would you deny that they’ve also got the most highly educated and amazingly beautiful news anchors working for them?

Well, a large number of people would be nodding instantly at this question. Come to think of it, we don’t simply tune in to Fox News to hear the political jargon they speak all through the day–they have truly got the hottest anchors under their wing.

Fox news female anchors are a class apart from everyone else because of their pretty faces and sharp minds. They are trained in the art of public speaking and have degrees in higher studies from premier institutes in the country.

Many of the former Fox News employees have joined the US President’s office as Counselor to the President, White House Communications Director, etc.

In this article, we have compiled a list of the top 15 hottest Fox News female anchors whose beauty, wit, knowledge, and grace make them hot and gorgeous at the same time.

So, without further ado, let’s jump right in! And remember, this list is arranged randomly, so none of the names follow any order.

Katie Pavlich is bold and fearless – and these qualities only increase her sex appeal. She enjoys widespread popularity for her fearless opinions.

She is a seasoned journalist with a strong command of several topics. Not only is she a good anchor and a host, but she has also authored many bestselling books in her career.

Jenna Lee has a lot going for her when it comes to looks as well as merit. She has an amazing resume, with deep knowledge of topics like international affairs, politics, and socio-economics.

She went to Columbia University for studying journalism. The Ivy League grad joined Fox Business Network in 2007 and was later shifted to Fox News Channel in the year 2010. She has also worked as an established anchor in Fox News Channel’s show, Happening Now.

Molly Line is a gorgeous journalist who started her career as an anchor and reporter with the WFXT channel. She worked excellently during her contract with the channel.

Line gained widespread recognition and her channel got good ratings when she covered the sentencing of shoe bomber Richard Reid and the Station Nightclub Fire in which about 100 people were killed. Then, she joined Fox News in 2006 and is still a part of the channel today.

There is more to Lea Gabrielle than what meets the eye! The Fox News reporter and correspondent had started working in a completely unrelated sector before joining the corporation.

She was an intelligence operations officer and fighter pilot under the US Navy.

Then she decided to switch things and opt for a career in journalism. Lea is efficient at presenting the news reports, and her smoking hot looks keep everyone’s eyes stuck to the screens.

Kimberly Guilfoyle is known for working as a host for the Fox News Channel’s hit production, The Five. Not just this, she also has a good reputation for her work in many other programs of Fox News.

Kimberly has been a prosecutor before switching careers and becoming a journalist. She is a staunch Trump supporter and left Fox News to help him with the campaign activities of forthcoming presidential activities.

Probably one of the most well-known Fox News anchors of all time–Megyn Kelly–has now got an award-winning movie after her where Charlize Theron plays her role.

She is widely regarded as one of the hottest Fox News female anchors of her time. An astute journalist and political commentator, Kelly was also a former corporate defense attorney. She currently works for NBC News for the morning show, NBC Megyn Kelly Today.

Anna Kooiman entered the journalism industry with her job at Fox Sports during her college days in 2004. She completed her graduation while working here, and learned more about the tricks of the trade in the following years.

Kooiman gained experience by working with WWAY and NBC for many years. She appeared on Fox News Rising as an anchor and is a deserving candidate for our list of hot Fox News anchors!

Maria Molina was formerly an on-air meteorologist for Fox Channel. She appeared in the show, Fox and Friends from 2010 to 2016.

She holds a Masters in Climate and Society and is now pursuing a Ph.D. from Michigan University in the same discipline. She left Fox to pursue her higher studies and focus on working as a research intern.

Martha MacCallum is someone whom you’d call “a Fox veteran”. She has been with the channel as a Fox News Anchors for a long time and in all these years, she seems only to be getting younger.

Her decade-long employment at Fox News only testifies to the fact that she has brought out amazing reviews for her work.

She is famously known for covering news related to the Presidential elections every four years.

As of now, she has her own show on the channel, American Newsroom where she is co-anchor alongside Bill Hemmer. Martha MacCallum worked with NBC News for several years before joining Fox News in early-2000.

Heather Childers is one of the hottest Fox News Female anchors to have hosted any show on the channel. She was a longtime co-host on FOX and Friends.

Before joining Fox News Channel, Heather worked as an anchor as well as a host in the TV world.

Childers came out to claim that she had a serious health problem for which she needed to seek treatment and hence she left her job at Fox News in 2013. She came back five years later after her treatment was done.

Heather Nauret is the next name on our list of top 15 hottest female Fox News anchors. She is a former Fox News anchor and became famous for her show, Fox and Friends.

Heather’s hot and attractive look plus her unmatched talent have awarded her many offers in the world of journalism.

After she resigned from Fox News, she took up the job of working as an ABC News correspondent. She has also appeared in Good Morning America.

Dana Perino is an ever-so-talented and beautiful anchor working with since 2009. She also served as a White House Press Secretary under President George W. Bush.

Currently, she hosts the Fox News Channel show, The Five as one of its members. She is also a prolific political commentator and her views come from an audience who worship her beautiful voice and deep knowledge of the American political scenery.

This former “best personality of the year” (conferred by Columbia Metropolitan Magazine) is an excellent journalist and news correspondent.

Her amazing looks and hotness has landed her jobs even before she joined Fox News in 2007. She worked as an anchor for KENS-TV (CBS 5) in San Antonio, Texas, and WLTX-Tv in Columbia.

Sandra Smith is a current news anchor at Fox News. But she started as an R&D research associate working under the firm Aegis Capital.

She did not wish to stick to corporate life and hence chose journalism as a career. She is undoubtedly one of the hottest Fox News Female Anchors on the channel.

Patti Ann Browne is currently associated with Fox News as a co-host for the channel’s hit show “Fox & Friends List” on weekdays. Also, she works for Fox News Radio Network where puts out hourly updates.

So, we have come to the end of the list of top 15 hottest Fox News anchors. Did you find your hot favourite on this list? Let us know in the comments below. Also, remember to share this article and spread the good word! Thank you for reading it, and have a nice day.

Benefits Of Drinking Honey at Night?