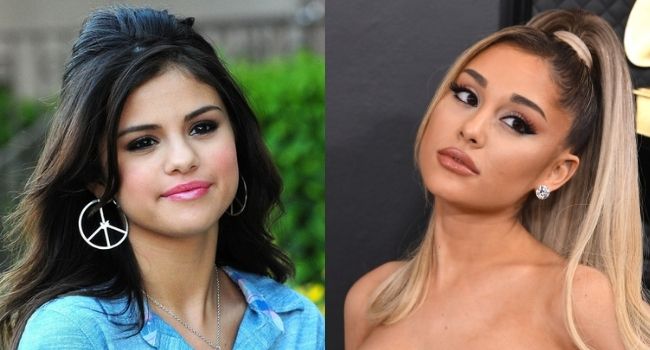 In this article, we have compiled a list of all the divine beauties who are blessed with singing skills and stunning looks all at the same time! Are you excited to find out if your favourite singer has made it to this list of Top 25 Most Beautiful Female Singers or not? Let’s jump right in and find out.

Selena Gomez is worldwide famous for her brilliant acting and singing career. Her name does not just represent her achievements, but also her growth as a human being.

The dazzling beauty has always been up for giving her fans a surprise, be it with her bold fashion sense, social media game, or a new chart-topping release.

With over 220 million followers on Instagram, she is at the top of the social media war between the prominent stars of Hollywood.

Ariana Grande, one of the most beautiful and talented pop stars of our generation, has gifted us numerous songs and groundbreaking albums.

Her social media skills are also top-of-the-line as she’s the most followed female celebrity on Instagram. She always tried to utilize her power for some good–putting up cat adoption ads, Covid resources, details about voting rights, etc.

Britain has given us one of the best singers of our generation–Dua Lipa. She rose to fame with her single ‘No Lie’ featuring Sean Paul. Currently, she’s dating Anwar Hadid–brother to the famous Hadid sisters–Gigi Hadid and Bella Hadid.

The singer has an amazing fashion sense too, having signed with Puma as their new ambassador quite recently.  Her second album Future Nostalgia became an instant hit in 2022.

When Billie Eilish entered the English pop/ electro-pop music industry with her brother Finneas, everyone knew they were witnessing the rise of incredible talent.

Her single ‘Ocean Eyes’ earned her international recognition but in our opinion, her breakthrough was ‘Lovely’ with fellow young singer Khaled. Recently, Billie received two Grammy Awards for her fantastic performance singing the latest James Bond movie theme and her 2021 single “Everything I Wanted”.

British singer Anne-Marie is another top female singer who rose to fame as a featuring act on Clean Bandit’s single Rockabye alongside Sean Paul. She has influenced thousands of people with her creativity.

Her debut album Speak Your Mind garnered huge attention and since then, she has produced a few chart-topping singles like FRIENDS with Marshmallow. One thing that you might not know about her is that she is also a former Karate Champion.

Taylor Swift is all of our childhood idols wh we still worship the same, if not even more. Only a few pop stars can match the gifted singing and songwriting prowess of this artist.

Her huge international fanbase calls themselves “Swifties” and they celebrate her music all around the world. Not only that, Taylor has come up many times as a staunch supporter for social justice, voting rights, and the rights of women in Hollywood and the music industry.

The former Billboard Woman of the Decade rose to popularity after her country-style songs made a major mark on the audience in the 2010s. Her stunning looks and beautiful blonde hair have earned her the seventh spot on this list.

Veteran singer Katy Perry is someone who demands to be mentioned when you’re talking about gorgeous female singers of our times.

She had been active for over two decades in the music industry now and has featured huge artists like Zedd, Migos, and many more. The beautiful singer got married to English actor Orlando Bloom and they have got a daughter called Daisy Dove Bloom.

One of the newer shining stars in the industry, Ava Max made herself prominent with her chart-topping debut single “Sweet But Psycho”. The song earned her huge international success with a #1 position in the 22 countries simultaneously.

The 27-year-old stunner released her album. Heaven & Hell in 2020 and is expected to drop some news on a new album very soon.

If you ask any teenager in 2021 or 2022 who they worship in the music industry right now? They will undoubtedly answer–Doja Cat. The goddess of soft rap says her claim to fame is her song “Mooo!” which went viral on social media.

That success opened many doors for her and she has produced many more singles which always end up going viral and becoming popular TikTok anthems. She has collaborated with industry superstars like Nicki Minaj, Ariana Grande, and Megan Thee Stallion.

When Saweetie was  24, she released her debut EP called High Maintenance to widespread success in the industry. The following year, her single Icy made it to the top of the Billboard charts and Migos rapper Quavo took an interest in her.

While their highly publicized relationship did not work out, Saweetie moved on and released her first album in June 2022 named Pretty Bitch Music. She also collaborated with Doja Cat on her single ‘Best Friend’.

Proud Latina singer Camila Cabello made it to the US from Cuba as a young girl with many dreams. Her music always pays homage to her South American roots and they are famous for their exotic vibe.

Her only goal was to become famous and she first tasted success when she joined the girl group, Fifth Harmony, after auditioning for X Factor USA. She left the band following some disputes and went solo with some amazing singles like ‘Crying in the Club’ and ‘I Got Questions’.

Cabello has worked with Bruno Mars, Major Lazer, Travis Scott, J Balvin and so many industry hotshots, so far. Her breakthrough was definitely ‘Havana’ from her debut album Camila.

Madison Beer’s career trajectory is surprising, for sure. She had only had mediocre success when Canadian pop star Justin Bieber tweeted about her when she was only thirteen.

In only a few days, she became the talk of the town and earned huge celebrity status. Her vocal skills are surreal and she has signed with Island Records, with Bieber’s help. Although it took a few hits and misses here and there, Madison has released a pretty good EP and quite a few singles till now.

English singer-songwriter Rita Ora rose to fame when her work with disco-pop artist DJ Fresh went ahead to become the UK number one song “Hot Right Now”. She dropped her debut album in the same year and that blasted in at the number one spot in the UK.

Her relationships have always caught the public eye because of her beauty and gorgeousness. As of now, she’s dating director and screenwriter Taika Waititi of Jojo Rabbit fame.

When Miley Cyrus entered the Hollywood industry, her father Billy Ray Cyrus guided her through it all and they became a father-daughter power duo, thanks to their appearances in the Disney show Hannah Montana.

She has since been able to turn around her child actress image into a successful pop star image in the tinsel town. Her albums Meet Miley Cyrus, Breakout, and Bangerz all came out at number one in the US list.

She went away from the limelight for some time and came back to amazing singles like Malibu, which is said to have been dedicated to her then-husband, Liam Hemsworth.

The beautiful curvy goddess Bebe Rexha started off as a songwriter for major English superstars. She was one of the writers aboard the project that turned out to be Eminem and Rihanna’s Grammy Award-winning single–“The Monster”.

When Bebe Rexha began releasing her own songs, she gained widespread success with singles like ‘I Got You, ‘Say My Name’, etc.

She collaborated with The Chainsmokerz for ‘Call You Mine’ which was also an international success. Her most recent collab venture was with Doja Cat–for ‘Jealous’ which had an amazing music video too!

American singer-songwriter Demi Lovato has been in the public eye since they were only a teenager starring in Camp Rock with the Jonas Brothers. Now, they have seven studio albums in the market and are regarded as a seasoned entertainer by her huge fanbase.

In 2021, Demi came out as a non-binary person after their messy breakup with ex-fianceé Max Ehrlich. They claimed their failed relationship with Ehrlich only provided them with clarity as to how they identified themselves.

The beautiful singer has stunning features and they deserve to be on the list of top beauties in the American music industry.

Olivia Rodrigo started as a Disney child actor before coming into the music scene. She released her debut single “Drivers License” and gained overnight success because of the relatable lyrics and soulful music of the song.

Fans compare her with Taylor Swift because of her songwriting abilities and they are not wrong, actually.

Julia Michaels’ debut single ‘Issues’ became a worldwide hit and earned her a quintuple-platinum certificate from the RIAA. Before that, she was a songwriter, having written for famous singers like Selena Gomez, Demi Lovato, etc.

Her debut EP ‘Nervous System’ dropped in 2017 following the success of ‘Issues’. Her most recent studio album Not in Chronological Order came out in April 2021.

British powerhouse of talent–Jorja Smith has had a very consistent career trajectory till now. She rose to success with her debut album Lost & Found and it also earned her a Brit Critics’ Choice Award. Her second album Be Right back was released last year.

Sza became famous when her first project, Ctrl debuted at  #3 on the Billboard 200. She also got nominated for 4 Grammy Awards that year, including the much-coveted Best New Artist.

Time Magazine said Sza’s album to be the best of 2017. Recently, her new single “Good Days” reached the top 10 list of Billboard Hot 100. Sza has almost elven features and she looks stunning in every outfit she poses in.

These actresses, though a bit new to the industry, have garnered widespread attention due to their talent and beauty. Here’s a list of five more actresses who are beautiful and receive a spot on our list!